Specialists in creating the perfect environment

Get a free quote or premises visit

Need a free quote for an installation or repair? Let us call you.

What Are The World’s Coldest Countries?

Cold this winter? The UK is certainly not known for its high temperatures or sunny spells, but nothing quite compares to the glacial conditions experienced yearly by certain countries up and down the globe. So grab your coats, boots and woolly hats, as we take a plunge into the coldest countries in the world.

Which Parts Of The World Are The Coldest? 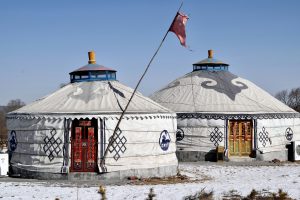 Winters in Mongolia are long and harsh. Temperatures sometimes reach a mind-boggling -45°C, which leaves the outstretching natural landscapes deserted for miles. Though conditions are inhospitable, these natural landscapes, with coats of thick snow undefiled by human activity, are some of the most beautiful natural sights in the world.

If there are two things Estonians are good at, it’s winning the Wife Carrying World Championships (for 11 consecutive years!) and battling the sporadic bouts of intense cold their country faces each year. Estonia is unique in that the cold conditions they face are the result of heavy monsoon winds and torrential rain rather than snow. However, this doesn’t make it any less cold, and it means Estonians must also battle other extreme weathering in addition to the shivering temperatures.

Finland is officially the world’s happiest country. And that’s perhaps all the more surprising when you consider that Finland’s climate can sometimes reach -50°C in winter. This is balanced out by their warm summers, however, which average between 13 and 17°C. Regardless, the Scandinavian population seem to revel in their weather all year round. 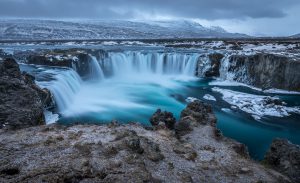 Unlike Greenland, Iceland delivers on the promise its name gives us. Iceland — it’s a land of ice. And while the small Nordic island can be green in parts, the freezing winter climates give rise to some of the world’s most majestic frozen sites, such as the snow-covered crater of Hverfjall.

Many Britons fail to comprehend the sheer size and scale of the United States of America. Texas alone is three times larger than the entire UK — and that’s just one of the fifty states! It is no surprise then that temperatures vary drastically across the world’s most powerful country. States like Colorado and Alaska are known for suffering from intense low temperatures, with Alaska once reaching a record -62.2°C in 1971. This is a huge contrast from states like California, which stay warm throughout the year.

The United States’ friendly neighbours are no strangers to cold temperatures. Canadians have the winter climate ingrained in their national identity, having formed much of their culture around skiing, ice hockey and widespread winter festivals — oh, and maple syrup. Bless you all for maple syrup.

The rumours are true. Greenland isn’t all that green, it’s actually covered in ice. In fact, Greenland has less green and more ice than Iceland. This is down to its huge coastline and sub-zero temperatures. Even at its warmest, Greenland struggles to reach 10°C. Residents of Greenland can, however, boast about their air quality, which thanks to their geographical position in the high north is some of the purest in the world. 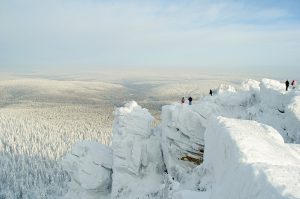 Mother Russia, due to its sheer size, consists of multiple continental zones. This means that the temperature can vary fairly dramatically throughout the country, although cold conditions are generally expected. Russians survive in the cold with their traditional ushanka-hats and Valenki boots. However, they may need to wrap up a little warmer in Oymyakon — a village in the far east — which once saw temperatures drop to a staggering -71.2°C.

At FM Mechanical, we understand how cold conditions can affect your life. We aim to help everyone stay as warm as they can, no matter the weather outside. This is why we provide top-of-the-range heating systems (among a huge range of other products) for customers throughout Sheffield, Doncaster and the surrounding areas. To enquire further, give our friendly team a call today.

This entry was posted in: General Interest

Why not bookmark the permalink?

Previous Post: « How Expensive is Air Conditioning to Run?

Next Post: What Are The Best Air Conditioning Brands? »

We are proud members of

Ideal climate solutions for your interior

We use cookies on our website to give you the most relevant experience by remembering your preferences and repeat visits. By clicking “Accept All”, you consent to the use of ALL the cookies. However, you may visit "Cookie Settings" to provide a controlled consent.
Cookie SettingsAccept All
Manage consent

This website uses cookies to improve your experience while you navigate through the website. Out of these cookies, the cookies that are categorized as necessary are stored on your browser as they are essential for the working of basic functionalities of the website. We also use third-party cookies that help us analyze and understand how you use this website. These cookies will be stored in your browser only with your consent. You also have the option to opt-out of these cookies. But opting out of some of these cookies may have an effect on your browsing experience.
Necessary Always Enabled
Necessary cookies are absolutely essential for the website to function properly. This category only includes cookies that ensures basic functionalities and security features of the website. These cookies do not store any personal information.
Non-necessary
Any cookies that may not be particularly necessary for the website to function and is used specifically to collect user personal data via analytics, ads, other embedded contents are termed as non-necessary cookies. It is mandatory to procure user consent prior to running these cookies on your website.
SAVE & ACCEPT